I’m all for storytelling.

But when communications go wrong, it can really mess things up.

There’s a time and a place for jokes. And for satire.

A provocative approach can jar readers into thinking about things in a new way.

But when you are talking to an international audience across many languages, keep it simple.

Have you ever noticed how diplomats talk to audiences? They use simple words and talk in simple sentences. The clearer they speak, the better they will be understood.

(I like to think that the world’s political translators appreciate this approach.)

Anyway, something really weird happened this morning in the climate change communications world.

Poland is hosting the world’s UN climate talks next month in Warsaw. It’s an important meeting about a gravely serious topic. It’s a huge honor and responsibility to host this kind of worldwide event.

But for some reason, someone decided to try something a little different.

The official Polish website for the meeting published a blog post. It started off just fine with the famous Northwest Passage. Fair topic. The fact that the Northwest Passage is open to sea traffic for the first time in recorded history due to melting sea ice is stunning physical evidence of climate change.

But then the copy swerves. The next sentences describe Poland’s plans to plunder natural resources previously locked under the ice.

Oh, and pirates. And terrorists. 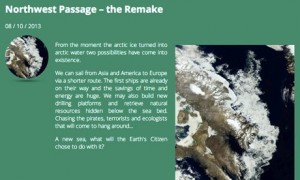 Melting ice could open the Arctic to new drilling and the opportunity to “chase pirates, terrorists and ecologists”, according to the organisers of this year’s UN climate talks in Poland, in comments that have been branded outrageous by campaigners.

The blogpost, published this week on the Polish site for November’s Warsaw meeting, said that not only would melting ice allow ships to cut their journey times by taking the north-west passage, but “we may also build new drilling platforms and retrieve natural resources hidden below the sea bed”.

It added that there was also the possibility of, “Chasing the pirates, terrorists and ecologists that will come to hang around …”

This blew up on Twitter this morning with the hashtag #COP19. Shortly thereafter, the blog was updated with an apology.

For the time being we decided to take some time away from our blog. Our idea was to focus attention on important issues that need good solutions and spark discussions on those.  We did not foresee that some readers would take thepresented texts literally as the official Polish position. Notwithstanding we would like to express regret as some of you found the text to be inappropriate. We acknowledge these criticisms. It was certainly not our aim to offend anybody.

We will take due care  that all new articles and posts on this website are written in a clear and sensitive manner so as to avoid misunderstandings. Stay tuned for more ideas.

What the heck happened?

Is this a case of “Lost in Translation?”

One person on Twitter even asked if it could be a hacker prank by The Yes Men.

RTCC also has a great round-up of this morning’s tweets and a broader look at some of the issues.

In any event, it’s an embarrassment for the UNFCCC, and for the Poland team who is responsible for the event.

Somebody might get fired over this mistake. Bigger picture, this could cost Poland their hosting role for this meeting.

Update from the Minister of the Environment of Poland:

@WWF_Polska Authors wanted to provoke debate. Pity it went wrong. Sorry to those who felt offended. Looking into how to improve engagement.